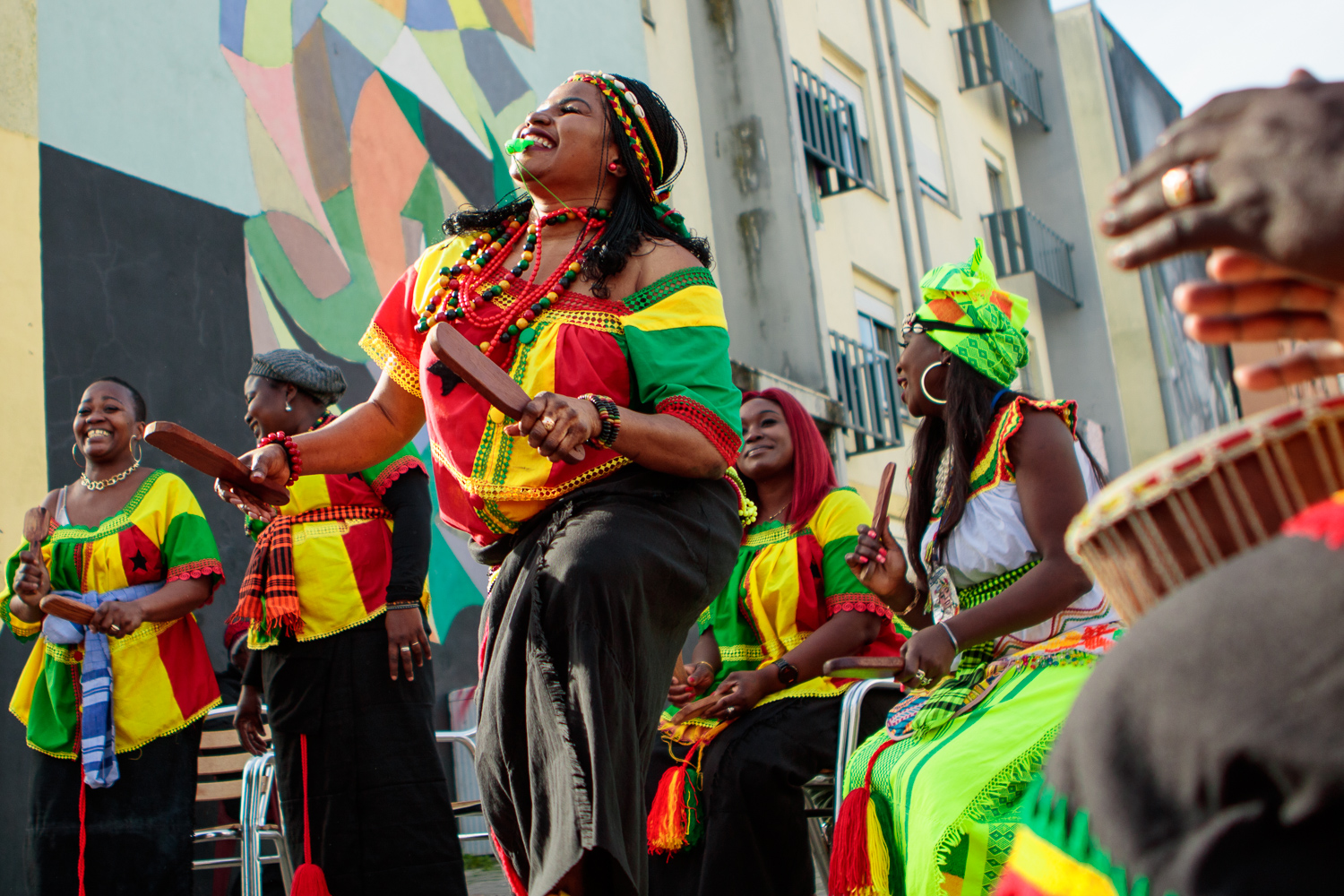 Photo: Inês Leote, Source: amensagem.pt. From Gomes's article in Creole and Portuguese on the Mandjuandadi group of singers and dancers.

[Editor’s note: The project described below was completed within the framework of the NewsSpectrum programme. NewsSpectrum provides grants to media or journalists working in minority languages in Europe, with the aim of fostering media pluralism as well as collaboration between minority- and majority-language media. The programme is an initiative of the International Press Institute (IPI) and the European Association of Daily Newspapers in Minority and Regional Languages (MIDAS). You can read the stories published and prepared within the framework of the programme by Mensagem de Lisboa here.]

People of African descent in Portugal face deeply ingrained social and economic discrimination. Among them are speakers of Guinea Bissau and Cape Verde Creole. Against this background, Mensagem de Lisboa, a Lisbon-based local news start-up, embarked upon an unprecedented project: journalism in Creole. “The main aim of this project was to give these communities a space, to empower them”, Catarina Carvalho, Mensagem de Lisboa’s founder and editor, tells IPI.

A grant from the NewsSpectrum programme allowed Mensagem de Lisboa to hire Karyna Gomes, a Lisbon-based journalist and musician of Bissau-Guinean and Cape Verdean origin with extensive experience in media and communications. IPI spoke with Carvalho and Gomes about their motivations and aims for launching news coverage in Creole, as well as the impact of the project on Lisbon’s Creole-speaking community.

Gomes decided to make podcasts during the pandemic after all concerts were canceled. She produced the podcasts without any financial support, and devoted them to Lisbon-based individuals of African origin who managed to succeed despite rigorous structural racism. Lisboa Creola, the local project collaborating with Mensagem de Lisboa, reached out to her about joining forces within the NewsSpectrum program.

As a NewsSpectrum fellow, Gomes has been producing stories related to the representation of the Creole-speaking population in all domains of Lisbon’s social life, the impact of African music and art on the city’s cultural landscape, challenges related to housing, and social and urban issues affecting neighborhoods with a significant proportion of Creole-speakers.

“If you play football very well, you can be Portuguese. If you sing very well, you can be Portuguese. But you are not allowed to be Portuguese if you want to be a journalist, a deputy, or an employee at the multinational enterprise”, Gomes says. She is certain that if it were not for the NewsSpectrum programme and Mensagem de Lisboa’s inclusive journalism, she would never have been able to start working as a journalist in Lisbon. People of color, she said, are not expected “to be intelligent” and apply for highly paid jobs.

“Mensagem de Lisboa is all about inclusive journalism, community journalism. They think of the whole Lisbon, not only of Lisbon of the white and of privileged. In Mensagem everyone has a space. Only in this kind of media could I have found the job in journalism”, Gomes says. She adds that her articles were targeted not only to Creole-speakers, but also to the wider public in Lisbon – she wrote all of her stories in both Creole and Portuguese.

Gomes argues that consuming content in the mother tongue is crucial for the community’s survival and development. “No people can be free if they are not allowed to write and read in their own language”, she argues, observing that the stigma that has been associated with Creole languages for centuries is still there. Many still deny that Creole is a separate language and not a Portuguese dialect. A programme like NewsSpectrum should have been launched 30 years ago, Gomes says – but better late than never as it has given minority communities an opportunity to “identify themselves with their stories and the language”.

Stories no one knew existed

Cape Verde Creole and Guinea Bissau Creole are widely spoken in Lisbon. Yet the voices of Creole speakers are barely heard in the local media. As a community media outlet, Mensagem de Lisboa ascribes special importance to readers’ feedback. It was, however, not easy to get direct feedback from the Creole-speaking community since, as Carvalho puts it, they are “largely absent from media coverage”.

However, the project attracted a lot of attention from the news media in Portugal – TV, radio, and different news agencies – something the Mensagem team did not anticipate at the beginning of the project.

“Content produced [within the course of the project] touched upon everything Mensagem is about”, Carvalho says. “Karyna prepared stories about things nobody knew existed. She reported on the ways that people of African origin are treated in the town”.

Gomes will remain a part of the Mensagem de Lisboa newsroom even after the end of NewsSpectrum programme. She says she wants to build the team of contributors and journalists publishing in Creole and has already been contacted by many Creole speakers from Lisbon willing to participate.

Carvalho shares this enthusiasm. “What we should do is have more engagement by the people these articles are about by bringing them into our newsrooms, going to those neighborhoods and talking to them, and building more tight and lively connections with them”, she tells IPI.

Mensagem de Lisboa was founded in February 2021. Since then, its major aim has been to serve Lisbon’s community. The publication follows the concept of community journalism in two ways. First, Mensagem de Lisboa’s reporters meet members of the community on a regular basis, listen to their problems and needs, and reflect on them in stories. Second, Mensagem reports on people from Lisbon who “do great things” and often come from underrepresented, underprivileged communities. Mensagem’s audience, therefore, plays a crucial role in the media outlet’s editorial processes. According to Carvalho, NewsSpectrum touched upon both of these aspects of community journalism.

Currently, the one-year-old local news project is trying to reach financial sustainability, which is not an easy task. “We are currently trying to break even”, Carvalho says. Part of Mensagem de Lisboa’s revenue derives from donor funding and the rest from reader donations. The expansion of the team and further development of coverage in Creole fully depends on the financial support Mensagem de Lisboa will manage to mobilize in the near future.