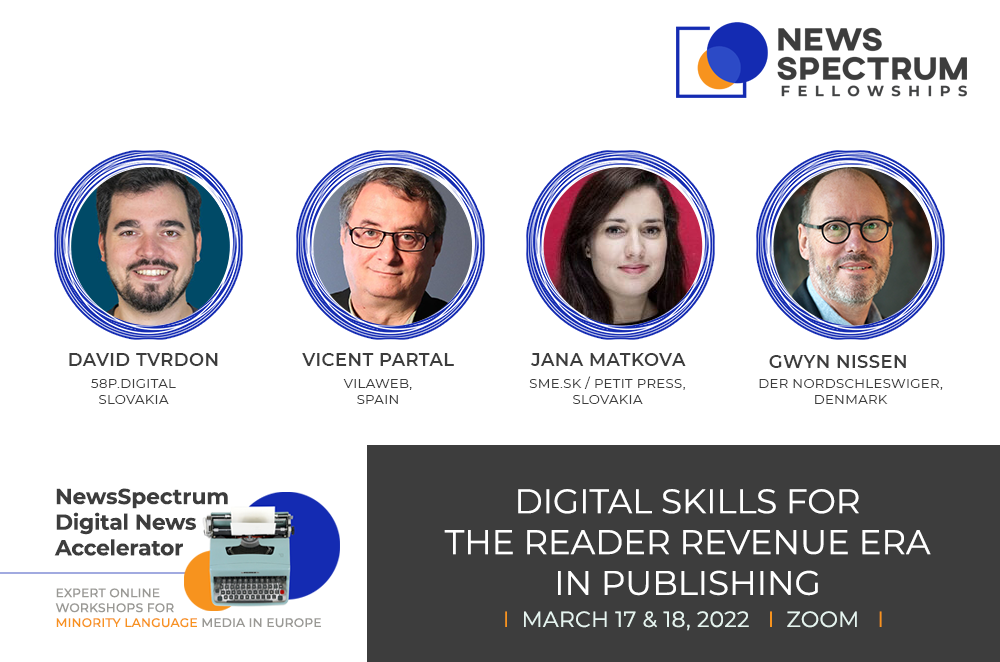 Minority-language media in Europe face pressure as revenue from their business model decreases and audiences turn to other sources or disappear. The digital transformation is inevitable but can take years to implement. With right tools and skills, however, it can be done faster.

The workshop “Digital Skills for the Reader Revenue Era in Publishing” focused on some of the basic blocks of growing direct reader revenue: newsletters, digital audio including podcasts, audience engagement, and social media.

(Trainers’ short bios are available below)

Additional readings and resources, best practices and cases to learn from:

David Tvrdon has worked in digital media for over 10 years, helped kick start podcasting in Slovakia, and has over five years of experience in digital marketing. He specializes in digital strategy including subscription growth and retention, newsletters, and online distribution. David writes a weekly newsletter on tech, media, audio, journalism, and has a weekly column at The Fix.

At the moment he is trying to find ways to get subscribers more engaged and is working on retention strategies such as building up a comprehensive newsletter offering and onboarding experience for new subscribers. He has won the innovation in journalism award in Slovakia.

Jana Maťková, the head of the podcast and video department at SME.sk. Studied journalism at Comenius University in Bratislava. Along with her studies she worked as a video reporter for Slovak daily newspaper SME and its website SME.sk. After school she has gone to public domain radio Slovenský rozhlas, where she covered daily news and was a host of evening show K veci. In 2020 she has returned to SME.sk and started to work as an editor and podcast host within podcast department. Now she is the head of the podcast and video department. SME.sk is the oldest podcast producer in Slovakia and it is one of the biggest producers in the country.

Vicent Partal is the director of VilaWeb. He has also worked at El Temps, El Punt, Diari de Barcelona, Catalunya Ràdio, La Vanguardia and TVE, among others. He is considered one of the pioneers of the internet in the Catalan Countries.

Co-founder of the weekly magazine El Temps in 1983, he was part of the Diari de Barcelona and TVE (Spanish public TV) newsrooms where he specialized in international politics. In 1994 he created the first internet news system of the Catalan Countries called El Temps Online. In 1995, together with Assumpció Maresma, director of the newspaper at the time, he founded the first electronic newspaper in Catalan, VilaWeb. The same year he created with Jordi Vendrell the program L’Internauta on Catalunya Ràdio.

Currently, he is the director of the electronic newspaper VilaWeb. In addition to publishing daily the editorial of VilaWeb, he writes once a week in Berria and Nós Diario.

Born in 1963 in Aabenraa/Apenrade, in the southern part of Denmark (NorthSchleswig/Nordschleswig/Sønderjylland), Gwyn now lives with his family in Rønshoved near the Danish-German border.