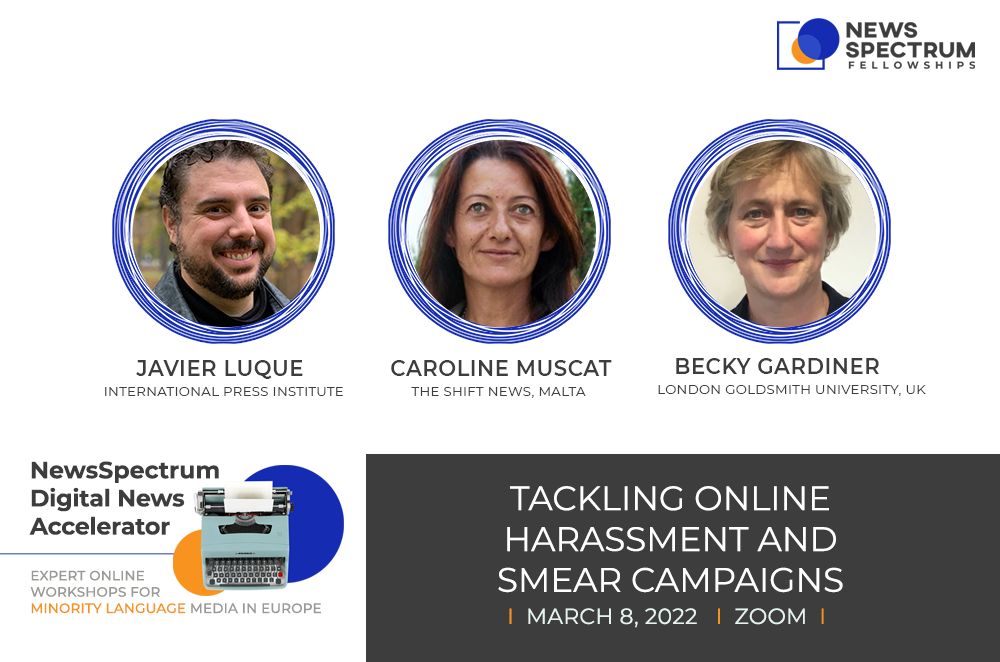 Online harassment is eating away at journalism. The abuse that journalists – and especially women journalists – are subject to online can leave a deep personal and professional impact. Reporters and media organizations alike are targeted in disinformation campaigns designed to smear their reputation and discredit their work. This special masterclass, based on a tried-and-tested formula, can power you to develop best practices with tools that work, both in your journalism and in your media organization.

In this session we introduce some of the tactics used to silence and intimidate independent reporters and discuss the best strategies to address them. We use an analytical approach that provides both journalists and media managers with unique tools to:
* analyse the attack
* assess the potential impact on the reporter
* adopt the best approach to combat the attack based on limited resources.

Becky Gardiner is the author of the pioneering study “The dark side of Guardian comments” and helped to develop the first guidelines to address online harassment at the Guardian, one of the first newspapers worldwide to develop such a protocol. In this session Gardiner also presents measures developed by IPI for newsrooms to tackle online harassment and disinformation campaigns targeting the credibility of journalists and news outlets. These measures draw from interviews with more than 110 editors, journalists, and community managers conducted over working visits to 40 newsrooms across Europe, as well as additional expert meetings and focus groups with legal experts, civil society representatives, and academics.

One of the measures to counter smear campaigns is applying your journalistic skills to investigate coordinated attempts to discredit your work and create an atmosphere where trolls feel entitled to intimidate you. We present the investigation that the indepenent news website The Shift carried out in Malta into the assassination of investigative journalist Daphne Caruana Galizia, looking at how secret Facebook groups worked to dehumanize and isolate her. The research became an important evidence into the landmark Public Inquiry into Daphne’s murder, which found that that “the State has to shoulder responsibility for the assassination […]”.

This course aims to help newsrooms establish an easy-to-follow protocol that aims to help prevent the toll online abuse can take on journalists and defend the news outlet against smear campaigns.

Javier Luque is the head of digital communications for the International Press Institute (IPI), where he coordinates advocacy and communication on IPI’s digital platforms. He has worked on online hate and abuse against journalists and media organizations since 2014. His research on this topic has been quoted by media worldwide such as the Guardian, The British Journalism Review, and Bloomberg News among others. In 2018 he directed “A Dark Place”, his third film documentary, which premiered at Vienna’s This Human World film festival. He has also worked as a consultant for the OSCE Representative on Freedom of the Media for their project on Safety of Female Journalists Online. Prior to joining IPI, Luque worked as a broadcast and multimedia journalist for local and international news organizations.

Becky Gardiner has been a journalist since 1990, working mainly as an editor in both print and digital media. She has held several senior editorial posts, most recently comment editor at the Guardian (2010-14). During her 16 years at the Guardian, she held a number of other posts including deputy editor of G2, education editor, women’s editor, launch editor of the family section and editor of the award-winning Comment is free website. Gardiner is the author of the pioneering research The dark side of Guardian comments and helped to develop the first guidelines to address online harassment at the Guardian, one of the first newspapers worldwide to develop such protocol. Currently, Gardiner is a professor of Journalism Studies at London Goldsmith University.

Caroline Muscat is the founder and managing editor of The Shift, an online investigative news portal. She was the former news editor of The Times of Malta and The Sunday Times of Malta. Her main area of focus is corruption. She contributed to and co-edited the book “Invicta: The Life and Work of Daphne Caruana Galizia”, a journalist assassinated in Malta in October 2017.  Muscat was awarded the Reporters Without Borders Prize for Independence in 2019 and the U.S. Embassy award for courage in 2020, among other awards.

This masterclass is part of NewsSpectrum’s Digital News Accelerator, a series of expert online workshops on digital transition and needs for minority-language media in Europe. The Digital News Accelerator is open both to NewsSpectrum grantees and to other representatives of minority-language media in Europe.